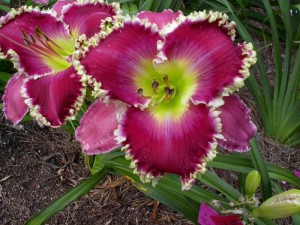 When I first saw ALAN LANE AGIN in bloom, it was at Larry Graces.  I had talked to Linda soon afterwards about the daylily and she said ALAN LANE AGIN is good but the sib, RED FRIDAY, is great! So taking  Linda’s  advice I purchased  RED FRIDAY.  So did many other persons. I was later  told Linda sold 175 pieces at  $175.00 a single fan. Wow she could sell a daylily. Anyways, I forgot about ALAN LANE AGIN until a year later when John Benz requested that I pick a piece up from Larry Grace during a fall visit and bring back to him. Larry potted ALAN LANE AGIN up, I brought it home and I called John and asked him to come on over and pick up. Well, it was spring by the time John came over and ALAN LANE AGIN was dead in the pot. I remember John saying to me quietly under his breath that will be the last time he asks me to pick up something for him! I’m not sure if John ever did get another piece ALAN LANE AGIN. But I did. Why?  Well after seeing multiple clean and bright colored kids in bloom a year later at a  few  hybridizers gardens, I could see that ALAN LANE AGIN produced a large number of keepers.  These keepers were vividly bright and clean in color.  Color! That’s the key word here. ALAN LANE AGIN was released in 2008 and the hybridizing potential is still virtually untested so it still should be used today. Based on what I’ve seen out of the kids produced, ALAN LANE AGIN ranks in my top 9 teeth daylilies from 2003-2008. BTW, John Benz if you still haven’t gotten a piece, I’ll give you one this spring. I’ve heard reports that it does survive in the North. My bad! (just in case you don’t know the definition for “my bad” it is as follows,*”I did something bad, and I recognize that I did something bad, but there is nothing that can be done for it now, and there is technically no reason to apologize for that error, so let’s just assume that I won’t do it again, get over it, and move on with our lives.” *urban dictionary.