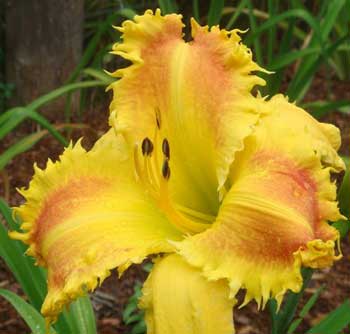 Prior to Bass Gibson’s release , John Rice offered the daylily with naming rights at a MWS. The daylily sold for $700.00 plus dollars to Donna Gibson. Donna named the daylily after her husband Bass. As fortune would have it Donna is a friend of mine and I was able acquire Bass Gibson the following year of introduction from Donna. John Rice was already sold out. I’ve often talked to John about Bass Gibson. John has made thousands of crosses and produced some beauties. And  I don’t know of a garden where a serious teeth hybridizer hasn’t used Bass Gibson. Larry Grace and Jeff Salter have some of the most striking yet to be released Bass Gibson kids that I’ve seen.  To my knowledge John has released three Daylilies out of Bass Gibson. Pins and Needles, Ruckus, and Shattered Glass.  I’d rate Bass Gibson as “Strong” in worthiness to still use today as a parent.