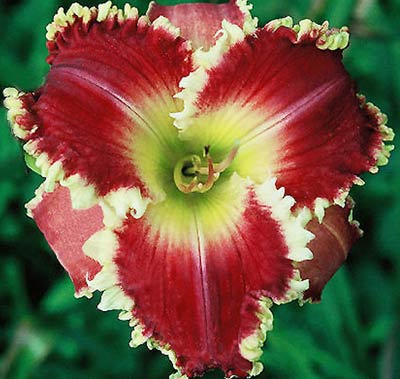 Dr. Robert Grant-Downtown picking up from Part 1 post. “What, then, are silver/gold/green borders and teeth? In my opinion, this kind of structural edge is not a proliferation of cells which have adopted the identity of the eyezone. Instead, I think it is formed from proliferation of cells that have adopted the identity of those in the throat area. Serrations, fringe and teeth are local points of growth and, as in leaf margin serrations, many factors such as growth hormones and transcription factors interact in a complex way to regulate their distance apart, rate of growth and final size. I’d hazard a guess that extreme proliferations such as longer teeth and tentacles are more than this still. Notice how the filaments of the stamens in the daylily flower “fuse” in the throat area? Perhaps these proliferations have adopted some of the identity of the anther filament, which is why their growth is so long and extended.” Robert Grant-Downtown

The daylily image, “CRIMSON SHURIKEN is the closest to true red with pure snow-white teeth that we have seen anywhere”.  John Benz

Part 3 tomorrow on the daylily blog.