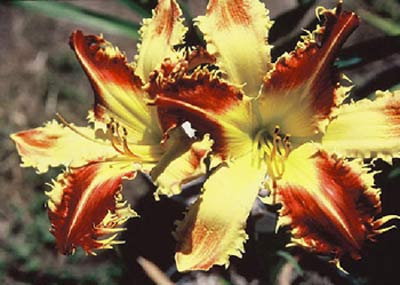 Dr. Robert Grant-Downtown, Oxford, England, was suggested by John Benz for his thoughts on what is happening in the formation of teeth.  So I asked him. Over the next several days I’ll share his thoughts with you and show images that readers have sent me.  Here goes part 1, Dr Robert Grant-Downtown. “I think that through careful observations there are many interesting and useful indications for hybridisers when it comes to elaboration of the edge in the daylily. From comparing the patterns of edge formation, I’d suggest that there may be a relatively simple rule to explain what is happening. What seems consistent in the types with picotee borders is that this structure is a mirror image of the eyezone. Simply, the border is a repetition of the development of the eyezone, with the border an outgrowth or proliferation of tissue that shares much of the identity of the eyezone. This explains why you don’t get a coloured outgrowth or border on a flower in the absence of a coloured eyezone. I’ve never seen an exception to this – though they may well exist. The really interesting thing is that the pattern within the eyezone (if it exists) is repeated in reverse order in the border. The outermost part of the eyezone is repeated in the innermost part of the coloured border, and so on.”