Mike has asked me to be a guest writer on his blog and to put together some thoughts regarding Brother Charles Reckamp.  Thanks Mike, it will be my pleasure and hopefully of interest to your readers.

Just a little historical background on Brother Charles.  He hybridized daylilies for nearly 50 years with his first seedlings numbered in 1949 and his final selections made in 1995.  His first registrations were made in 1955.  Over his career he accounted for 240 registrations of which only 29 were diploid.  Brother Charles was part of the tetraploid “rat-pack” that included Fay, Marsh, Griesbach, Munson, Moldovan and Peck who were committed to the tetraploid revolution.  His first 5 tets were introduced in 1966, 3 of which were from seed conversions and the other 2 were out of Fay’s Crestwood Ann.

One of Brother Charles’ hybridizing interests was “ruffles”.  I’ve not seen anything in print nor anybody who knew him where he spoke about gold edges or teeth as breeding goals but I think they were a natural outcome of his focus on ruffles.  The first gold edges are reported to have come from Fay’s and Reckamp’s programs.  It is believed that Munson’s gold edges came from Reckamp’s lines.  Leo Sharp commented that AMEN (Reckamp, 1976) had the first significant ruffling.

In an earlier blog we discussed STARTLE (Belden, 1988) (Broadmore Red x My Sunshine). While Broadmore Red has a bit of a white border, it is clear the the ruffled edge of this superior breeding plant came from Reckamp’s lines.  There are only 6 registered intros out of MY SUNSHINE, 5 of them by Brother Charles plus STARTLE by Belden.

HEAVENS TROPHY (Reckamp-Klehm, 1985)is another out of MY SUNSHINE.  Both images courtesy of Sandy Houck who used to have a website and the most extensive collection of Reckamp daylilies and was a major source of inspiration for my interest in Brother Charles’ work. 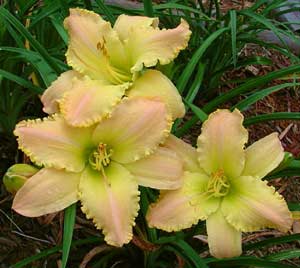