HEAVENLY CROWN (Reckamp-Klehm, 1979) is a cultivar that I think has been somewhat overlooked in terms of its contribution to toothy breeding.  You will find it in the background of a number of toothy cultivars.  Emily Olsen, Everett Dougherty, John Rice and Virginia Peck have been the primary hybridizers using HEAVENLY CROWN.  The AHS Registration Database shows 23 registrations with it in the parentage, 15 of which have it in the first generation.  You may recognize kids like GRAM’S DREAM (Olson-E, 1994), PINK FANG (Olson-E, 1998), CROWN OF CREATION (Rice-J, 1998) and TWILIGHT COLORS (Rice-J, 2004).  In an earlier blog we had already confirmed that JAGUAR’S PAW (Dougherty-Rice, 2007), the pollen parent of BASS GIBSON (Rice-J, 2006) was in fact a HEAVENLY CROWN kid.  You can see the similarity between HEAVENLY CROWN and JAGUAR’S PAW in this pic of it from Sandy Houck.

Rice’s CROWN OF CREATION (Pure and Simple x Heavenly Crown) has been around for 12 years and yet there are only 2 registered intros with it in its parentage!  HEAVENLY CROWN put a significant edge on this flower when crossed with an non-edged pod parent.  CROWN OF CREATION will double occasionally for those interested in toothy doubles.

Next up, ANGEL’S SMILE. 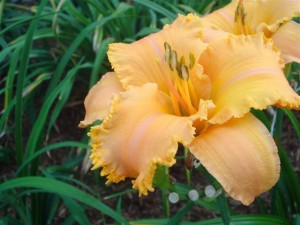