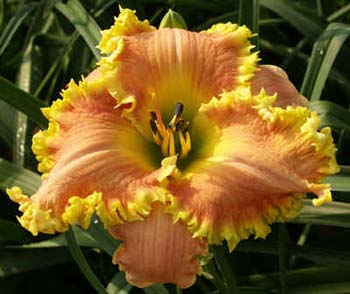 I recently spoke to John Kinnebrew Jr. about next year’s 2011 releases. He said he will have several teeth introductions for next year. He has a really nice introduction coming out of Randy Stephens.

The Kinnebrew’s have been using FORESTLAKE RAGAMUFFIN in their crosses since the early 2000’s. One introduction of particular interest is PAULA NETTLES. Most people know that I like teeth on the sepals and John Jr.  says this about P.N. “ for  breeders, this one has some teeth starting on the sepals as well.” The cross is also very appealing. (Spacecoast Passion Released x Forestlake Ragamuffin). We all know RAGAMUFFIN by now. It is the S.C. Passion Released that I find intriguing in the cross. The cross of S.C. PASSION RELEASED is (Spacecoast Starburst x Childhood Treasure.)  Why do I find it intriguing?  Here is something not many people know. It has been suggested that SPACECOAST STARBURST is one of the parents to Matthew Kaskel’s  BEST EDGE.  We all know by now that BEST EDGE and introductions out of BEST EDGE have a tendency to bred green edges. So one could surmise that SPACCOAST STARBURST is possibly responsible for the green in BEST EDGE.

Back to the cross of PAULA NETTLES, if the above is indeed a fact, you have a decent probability of pulling out a recessive green teeth when crossed to green edge. John has PAULA NETTLES for available for $75.00…

I am going to be off until next Thursday, I have family business to take care of. We will start back up Dec 9.

Happy Thanksgiving to everyone…Thanks for reading the daylily blog.