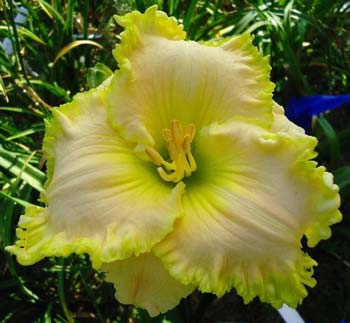 A  daylily that arrived on the scene in 2010 with a green edge was Bill Waldrop’s  IRISH HALO. The cross is (Leslie Renee x Angels Gather Around)(Leslie Renee x Angels Gather Around). A past memory was in Stamile’s garden with Steve Moldovan.  Pat proudly showed us a fresh seedling bloom from his refrigerator saying “ look at the daylily with the green edge”. The seedling later become LESLIE RENEE. When Pat introduced LESLIE RENEE he proclaimed it as the first flowers that could be called green in edge. Another noteworthy tidbit of information is that RED FANG is in LESLIE RENEE. The cross is (seedling x Red Fang) Northern Glitter). Remember that Pat said the edge in RED FANG is often expressed with teeth. And that Pat also said RED FANG represents the future of reds.

A recent memory was when Bill Chambers and I visited Bill Waldrop and his wife, Diana, this past spring. Bill W.  proudly showed us IRISH HALO.   We stood in front of the daylily and discussed its merits. Bill didn’t have to convince me it was an outstanding daylily as I knew the pedigree and could visibly see the plant habit. Thankfully, Bill had a piece to spare for me to take home and I was able to use it this year in hybridizing.

I like IRISH HALO over LESLIE RENEE as daylily to use in green teeth hybridizing because of the scape height and double doses of LESLIE RENEE.  LESLIE RENEE is registered at 24 inches in scape height, IRISH HALO boasts of a 30 inch scape.  Another reason is that Larry Grace’s   ANGEL’S GATHER AROUND is the other parent. That cross is (Mandalay Bay Music x J.T. Davis).  J.T. DAVIS,  2010 Stout Silver Medal winner, has been known to produce green edges.

If you want IRISH HALO, Bill’s supply has been limited. But it is a fast increase so call him to inquire.  LESLIE RENEE is being sold on the Lily Auction for under $25.00. It is certainly worth buying to use for teeth crosses for the budget minded purchaser.