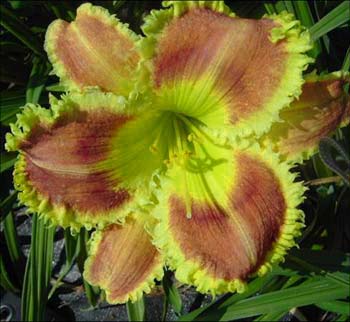 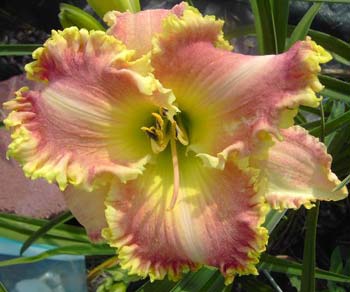 This is a seedling that was hybridized by my good friend Shirley Farmer. I call it SHIRLEY’S GREEN TEETH. When Shirley’s daughter turned over her garden to our care, this was one of the daylilies that I selected. The cross is (Leonidas x Creepy Crawler) (Seedling). LEONIDAS is a Harris-Benz hybrid with a cross of   (Yuma x Olin Criswell). Leonidas is an oldie that I really like. It is a yellow self and shows an early example of small teeth and hooks. Remember YUMA  is also a parent of FORESTLAKE RAGAMUFFIN. CREEPY CRAWLER is a Hite hybrid,  (Mary Todd x Golden Surrey). And lets not forget that CREEPY CRAWLER worked its way into Fran Harding’s Forestlake line also going to 3’rd generation to FORESTLAKE POINT LACE. The seedling in Shirley’s cross is unknown to me. If I had to guess the cross, it is Shirley’s 2010 introduction, SHABBY  CHIC.  SHABBY CHIC is ((Forestlake Ragamuffin sib x Enchanted April) (Angels Smile X Ida’s Magic) Forestlake Ragamuffin). Studying the seedling in GREEN TEETH, I can see the high probability of ANGEL’S SMILE in it.

When John Benz saw SHIRLEY’S GREEN TEETH he immediately asked me for it. I told John that it had a short scape. John said he didn’t care because he knew the genetics in it were powerful for teeth and he said he thought it would breed green teeth. John for several years previous had been working on green teeth so this daylily was a fit in his program. So John took home a piece in 2009. We should see the results in 2011.

Next week we will be talking about Green Teeth Daylily Hybridizing. Tomorrow a follow up on FORESTLAKE  WARM AND FUZZY on the daylily blog.