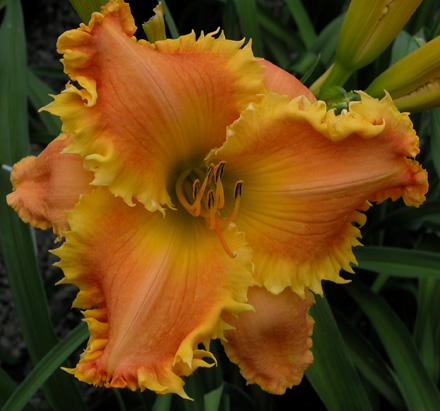 The cross of John Rice’s BASS GIBSON is (Forestlake Ragamuffin x seedling). The seedling was known previously as Jag 3, hybridized by Everett Dougherty in the mid 1990’s. John Rice has subsequently registered the seedling with the name of JAGUAR’S PAW. JAGUAR’S PAW is registered as (JAGUAR x seedling).(note Registration is wrong. JAGUAR PAW is a sib to JAGUAR).  A JAGUAR is registered (Seedling x Seedling). The question begs what is in the seedlings? Dave Mussar was kind enough to share that HEAVENLY CROWN of Brother Charles may be the answer. Looking in the database, Dougherty did indeed register daylilies with HEAVENY CROWN as a parent. I will try  to get confirmation from John on the seedlings.

The first offering of BASS GIBSON came at a Region 10 auction. John offered the daylily as a seedling to be named by the buyer. Donna Gibson was the winner of the naming rights. She named the daylily after her husband Bass. John released the daylily several years later.

BASS GIBSON is a much storied daylily in the fact that about every hybridizer that has pursued teeth has used it. John once told me that he had made 1000’s of crosses with BASS GIBSON and rarely got an improvement. John has already released a few of his success’s , PINS AND NEEDLES and RUCKUS.   I crossed BASS GIBSON to BEST EDGE and got a bunch of ugly daylilies. The color was dominant toward yellows and melons. I probably should have hit it with a strong line bred purple. Nevertheless BASS GIBSON remains as a cornerstone in many hybridizer’s crosses.  Several hybridizers that will have BASS GIBSON introductions in the future include Jeff Salter, Herbie Phelps, Larry Grace and John Rice. If any of you have kids out of BASS GIBSON to share send them my way and I will share… Tomorrow on the Daylily Blog we will look at another special daylily out FORESTLAKE RAGAMUFFIN….