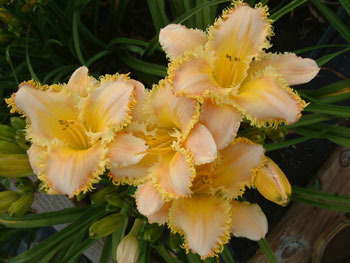 I received an update from John Rice today in regard to BASS GIBSON. John stated “JAGUAR’S PAW is a sib to JAGUAR.  Everett told me there were 3 siblings (these 2 and 1 other) and one parent of them was most assuredly HEAVENLY CROWN (Brother Charles Reckamp).  I don’t know how AHS data base got JP as a child of JAGUAR.”  Dave Mussar had heard this information also. Now we have confirmation from John. I looked at JAGUAR’S PAW on John’s website. I believe it is still worth working with. At $45.00, I added it to my ongoing purchases.

When you talk about FORESTLAKE RAGAMUFFIN the star studded children out of it continually grow. While visiting Tom Polston’s, of Pleasant Valley Daylilies in 2005, I saw a seedling that struck me as being extremely fine. I asked Tom about the cross. He said it was (Forestlake Ragamuffin × Ruffled Strawberry Parfait). I thought WOW; look another successful cross of Forestlake Ragamuffin into the Reckamp line. After some negotiation with Tom, he let me have a piece early. Two years later Tom introduced the daylily now named WILD HAIR. Tom immediately sold out. And remains sold out today. This past summer Tom was pleased when Bill Waldrop personally told Tom that WILD HAIR set a new standard on Teeth daylilies.

Recently I asked Tom Polston if he’d made the BASS GIBSON x WILD HAIR cross. He said he did. Tom will bloom the kids in the summer 2011…those could be radical seedlings!… tomorrow Angelo B sent me a cross from Bass Gibson; we’ll take a look on the Daylily Blog…