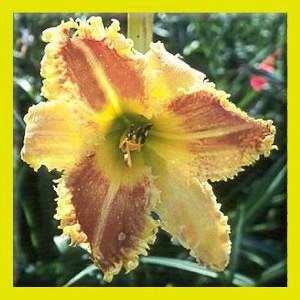 Checking the AHS Database there are approximately 65 first generation registered daylilies from diploid and Tetra Spindazzle.  Not bad for a daylily whose color was judged as muddy.  Of these daylilies, Jamie Gossard has introduced according to the dbase, 15 first generation tetraploids.   So in the days of hybridizers stressing color, why would Jamie be so interested in Tetra Spindazzle.  One reason, teeth.  Jamie was already interested in narrow daylilies. These traits combined, gave Jamie the tools he was looking for.   So after days, which lead to weeks of conversation with John Benz about Tetra Spindazzle’s potential, Jamie acquired Tetra Spindazzle in 1995.  Jamie’s first big success cross from Tetra Spindazzle was HEAVENLY BEGINNINGS, introduced in 2001. . Even Steve Moldovan, who had a very discriminating eye for color, did not pass on this daylily. The teeth and edge were radical. HEAVENLY BEGINNINGS was Jamie’s most used tetraploid teeth parent at the time. He has 23 third generation introductions from HEAVENLY BEGINNINGS according to the dbase.   More Daylily Blog on Jamie tomorrow…