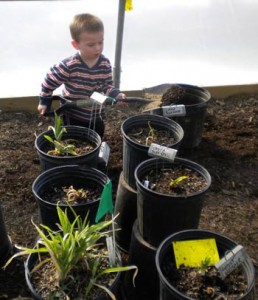 When Sandy and I first began hybridizing in the mid 1990’s, we both were employed with nicely paying jobs.  We built multiple well landscaped beds filled with perennials and daylilies. They sure looked great, at first. The second season weeds began to grow better than the flowers in the new beds. So we decided to get weeding help. We first employed our kids at ten dollars per hour. After several weeks of daily debate and nagging at them, we let them go. It was better for both parties. Next we employed our nieces. That was a temporary move in the right direction, they worked one day, they didn’t come back? So we thought lets hire a person who we don’t know.  We did. The first teenage boy hired worked for about an hour and then told Sandy he didn’t want to weed anymore and give him another job.  Sandy explained he was hired to do the work she didn’t want to do. Sigh… he was fired. The next boy hired worked out for several weeks only to leave for a landscaping job using us as a reference.  At that point we gave up on hiring anyone to weed. We just figured today’s kids aren’t as hungry as we were as youths. Today we manage our weeding ourselves with help from Kimberly and three year old Nick. We don’t like it any better than we did in 1996, but at least we are retired and don’t mind saving ten dollars per hour.

This entry was posted in Daylily Hybridizing. Bookmark the permalink.