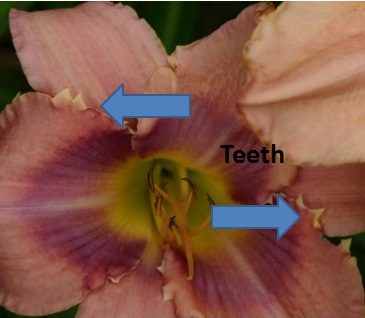 In speaking with David Kirchoff last week, I asked him where the term “teeth” originated. David said the term possibly can first be attributed to three people. Betty Woods, Ra Hansen, and Mort Morss. Mort bloomed SHARK’S TOOTH (image one) in the early 1980’s and that is where he first used the word. One of the parents to SHARK’S TOOTH is CHICAGO KNOBBY(image two).  Roy Woodhall explained to me that the term “Knobs” was used prior to the term “Teeth”.  Knobs have rounded tips opposed to  pointed tips of Shark’s Tooth.  Roy did say that some early daylilies that were described as “Knob Edged” may have also exhibited what we now refer to as “Teeth”.  The image of SHARK’S TOOTH clearly shows teeth. While the image of CHICAGO KNOBBY displays knobs and tiny  sawteeth.

If anyone else has more to add to the orgin of the term “Teeth” please let us know.

More tomorrow on the daylily teeth blog. Thanks David , Mort, and Roy. 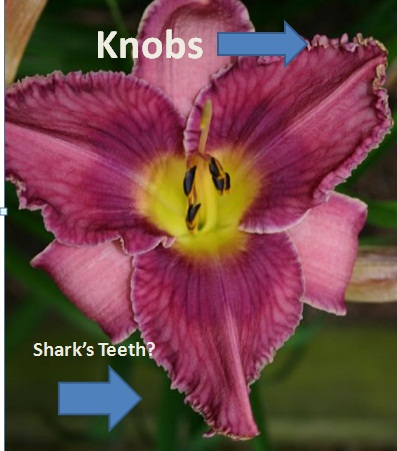