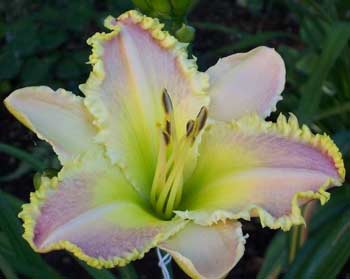 Without question Ruffled Strawberry Parfait is turning out to be Brother Charles’ greatest contribution to toothy daylily breeding to date.  It was selected as a seedling in 1993(seedling number BC93-52), was released by Song Sparrow in 2001 but only registered with the AHS in 2003.  This cultivar was different in that it had actual shark’s teeth versus the tendrils and fringing that seemed to be coming out of his lines.  Further Ruffled Strawberry Parfait shows more pink-lavender colour than was typical for most of his introductions. We are just starting to see the breeding potential of Ruffled Strawberry Parfait.

Currently the AHS database shows 11 first generation kids out of Ruffled Strawberry Parfait, 7 of them by Joel Thomas Polston and 1 each by four other hybridizers including Curt Hanson, Herbie Phelps and Jamie Gossard.

Probably Joel’s most dramatic introduction was his 2008 Wild Hair (Search for WILD HAIRS) on site search, a cross of Ruffled Strawberry Parfait x Forestlake Ragamuffin.  His Lady Stephanie Victoria Redding (2008) has dramatic colour and edge and is proving in itself to be a great breeder. Joel told me that his seedling that won the King of the Hill contest recently is out of Lady Stephanie breeding.  Did you see the teeth on that one!! I’ve had Ruffled Strawberry Parfait since 2002 and kick myself for not using it more, especially in toothy crosses.  One challenge I’ve had is that it is one of the last to bloom in my garden often not until mid-August or later when there isn’t much to cross it with. I’ve learned to freeze the pollen so I can use with earlier blooming toothy cultivars. Joel has about a dozen future intros coming out of Ruffled Strawberry Parfait and is still using it heavily.  While it may never catch up to Angel’s Smile in terms of the number of progeny I expect that in a short while that it will become the second most widely used Reckamp cultivar ever and that we will see many more exciting toothy cultivars from this fabulous breeder.

Note from Mike: The King Of the Hill Contest was sponsored by Cary Petterson’s mydaylilies.com  Mick Morry was the administrator of the contest. It was voted on by site members.