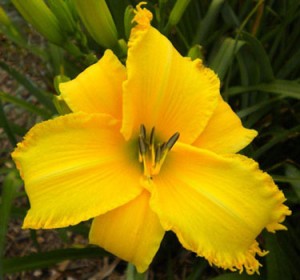 The genetics of Tetra Spindazzle injected in Florida daylilies came from Dan Trimmer’s CROCODILE SMILE.  Dan Hansen, Luddy Lambertson, Gunda  Abajian and John Peat  all have introductions out of Crocodile Smile.  Dan Hansen used Crocodile Smile in his several introductions including  DEVINE LIGHT. This daylily helped Dan produce one of my favorites of his, VORACIOUS VIXEN.  V.V. while short in our garden is healthy and hardy.  Sandy was very happy to use V.V. in her hybridzing program. Luddy used Crocodile Smile in several of his introductions also. His FLORIDA SCRUB JAY , a second generation C.S. cross from BIRD TALK, was taken by Gunda and used to produce LEDGEWOODS JUNGLE MUSIC and LEDGEWOOD’S WHEN SPIRITS UNITE. Gunda also produced a first generation Crocodile Smile cross with her introduction of NINA VERHAERT. John Peat used Crocodile Smile to produce CRAIG GREEN, which John carried on into his BARNACLE BILL and HELMUT WEICHSELBAUM.  HELMUT W. and NINA V. are closely related in that they both have FORTUNES DEAREST in them.

An interesting but not surprising  observation, with these Southern crosses of  second generation and beyond Tetra Spindazzle,  is that lavender tones appear  whereas in the North hybridizing programs  the ruddy reds and yellows are more prevalent…Gloden Glitz introduction, out of a Benz Introduction, REAP THE WHIRLWIND gardened named yellow  hairs…more Daylily Blog on Tetra SPindazzle tomorrow